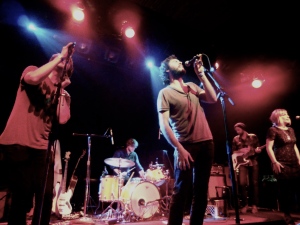 During finals week, I was faced with a dilemma: do I halt my studies, pause my paper writing, to go to December 12th’s Stornoway concert at the Independent? Do I sacrifice a semester’s worth of hard work to see what the Times called “Britain’s most exciting nu-folk band”?

I wish this had been a difficult decision. I’d like to say I was pried away from my books, my friends ripping St. Augustine’s Confessions out of my cold, dead hands, but this was very much not the case. I had been looking forward to seeing this folktastic band, whose first single “Zorbing” instantly won my heart, for months. I tossed my textbooks into the corner, rushed out the door, and trekked across San Francisco to the swanky but simple Independent (which bears striking resemblance to London’s Hoxton Square Bar and Kitchen).

Before the Oxford boys took stage (yep, Stornoway is not actually from Stornoway), a fast-rising band called The Head and the Heart played songs from their eponymous debut album. I hadn’t done my usual pre-concert opening band stalking, and thus had no idea what to expect from the Seattle sextet; all I knew was that the man behind me (wearing a red reindeer sweater) was about to faint from excitement. It didn’t take me long to discover the reason for his enthusiasm–like the rest of the unsuspecting audience, I was quickly swept up in their buoyant brand of Americana-pop. Anchored by strong percussion, rhythmic keyboard, and a pair of strong lead vocalists (Jon Russell and Josiah Johnson, as well as wonderfully textured backing vocals by Charity Rose Thielen), their well-crafted

songs are both accessible and authentic. The concerns of transitioning twentysomethings are couched in catchy melodies, with oft-changing time signatures and well-placed rousing crescendos. Although the band feels surefooted and mature, their most successful moments come from simple statements of vulnerability: the vehement repeat of “I’ve changed, I’ve changed, I’ve changed” in “Ghosts”, or the sweetly sentimental chorus of “Honey Come Home” poignantly betray the band’s youth. As a twentysomething myself, I couldn’t help but relate to their expressions of restlessness and homesickness, promise and nostalgia–the hopeful instability in this phase of life.

Like folk kings Fleet Foxes before them, The Head and the Heart has signed with Seattle’s Sub Pop Records. Their manager is Jordan Kurland (Death Cab for Cutie), and they’ve opened for Dave Matthews and Vampire Weekend. They’ll shortly be playing with the Walkmen at none other than London’s Shepherd’s Bush Empire (as well as a headlining show at the Lexington, in my old neighborhood), and will then begin a tour with Dr. Dog. Clearly the group of Northwest transplants has made some impressive leaps since self-releasing their album this past June, and it seems likely that NPR’s prophecy will prove correct: they are perfectly poised to be “Seattle’s next big band”. And the next time they come to San Francisco, I’ll likely be bellowing the lyrics just as loudly as the man behind me in the reindeer sweater.

It’s finals, which means no fun for Katie, at least for a bit. But I kind of cheated, because I had a fantastic time at a concert last night–Stornoway at the Independent, with wonderful opener The Head and the Heart.

In anticipation of a stellar review, I’ll give you a couple music videos.

I have to apologize for the massive blog post shortage over the past few weeks. Besides the ridiculously heavy work load for school, I’m also moving–which means most weekends find me putting baby pictures in boxes and throwing away six year old movie ticket stubs. I’ve now realized that there isn’t a whole lot that separates me from the people on Hoarders.

Anyway, I’m supposed to be reading about freak shows right now (we rhetoric majors have all the fun), but expect increased activity in the next few days.

In the meantime, enjoy this short playlist of study jams du jour.